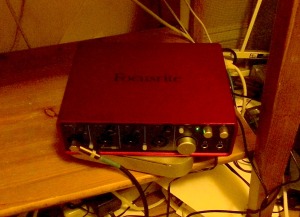 It’s twice as big as the mini mac!

I recently got a FocusRite Scarlett 18i8 — a little USB-based digital recording interface.

It’s been a long time since I did home recording, unless you count my YouTube videos done with the handheld camera my dad gave me. My last set-up was a 4-track Tascam cassette recorder. I still have it, but I haven’t used it years, because I don’t even have another cassette tape player, much less a way to convert the recordings to digital.

Back when I got that, it was a few hundred dollars, and anything resembling a studio microphone to go along with it was hundreds of dollars, with very few options below $1,000, so of course I just used dynamic mics. It was barely useful for demo recordings. Digital options were just coming out at the time and ran in the thousands of dollars for anything that was as functional or as good sounding, so I didn’t even bother looking until much more recently — when I discovered that things like this existed for less than I had paid for the Tascam.

I’m using Joe Scala’s old mini mac with it, and did some things in GarageBand just to get used to everything. All the recordings I’ve done so far are just plugging the guitar (with or without my pedalboard) into the interface. The preamps in the interface are very good, so I’ve been impressed with that so far.

I set up a Soundcloud page to host the recordings. Here’s a couple of the ones I made in GarageBand:

A Mark Knopfler instrumental piece from some of his soundtrack work I’ve always loved:

Then this week I picked up LogicPro, a digital audio workstation program that GarageBand is based on. It’s a professional-level DAW for a ridiculously good price, and I immediately liked it as much as Protools. It’s very easy to use and intuitive, even if things are in a different place (or called something different) than what I’m used to. To learn overdubbing and punching in, and to get used to the plugins and amp models, I recorded a little bit of rock and roll:

There are a couple things that immediately struck me: First, the signal:noise ratio is much better than GarageBand, with much less hiss. Everything just sounds a little clearer. Second, punching in (that is, recording at a specific place in the track to correct a mistake or pick up where you left off) is a breeze, with a “count in” setting to automatically play a few bars before the recording starts. It also seems to automatically crossfade overdubs (blend them together so you can’t tell that they were different takes), and a bunch of other super helpful stuff. The plugins (effects — like compressor/limiters, reverb, etc.) also seem very good. Finally, the amp models are excellent. Garageband was good for clean stuff, but the second distortion, whether from a pedal or its own modelers, became involved, quality really degraded. It sounds more natural in LogicPro, and there are some really cool things you can do like changing the “microphone” model or even moving it to a different place on the “speaker,” which I thought was a pretty insane detail to include.

I picked up a couple budget Audio Technica studio mics that got good reviews, and I’ll be using them as soon as I’m set up somewhere in the house appropriate for singing or micing a guitar. Unfortunately, the basement practice room has a leak in the wall that lets in water when it rains, so I need to get that sorted out before I can use the room regularly.

All of the above tracks were done with the Don Quixotecaster. I did use the mandolin on something I didn’t post to Soundcloud, and it worked fine through the pedal board.

I’m really looking forward to doing lots of recording now. I sort of forgot what a good practice tool it was, but also this lets me do one of the things I really love about music all the time — some people like playing live best, but I’ve always enjoyed the time in the studio, where you really get to play around and make mistakes and discoveries (sometimes both at the same time!), more.